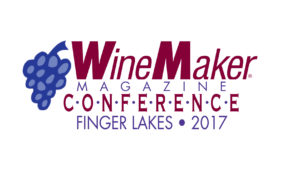 Vinmetrica was at the Winemaker Magazine Conference, held at the Statler Hotel on the Cornell University campus, amid the beautiful Finger Lakes Region of upstate New York. Every year the conference hosts hundreds of wine and cider enthusiasts who are passionate about their craft. As always there were numerous presentations and workshops on vineyard practices, wine making, and of course, quality management END_OF_DOCUMENT_TOKEN_TO_BE_REPLACED

Do you want to take your winemaking to the next level? We hope you already measure important parameters like free SO2 (sulfites), pH, titratable acidity and malic acid, but residual sugar has always been tricky, expensive, and/or subjective when trying to get a quantitative answer. Now Vinmetrica introduces its NEW Residual Sugar reagent kit.  Using the pH meter you already have, you can now get accurate and reliable residual sugar data. END_OF_DOCUMENT_TOKEN_TO_BE_REPLACED

The beauty of winemaking is that no matter which side of your brain you use more often, it encompasses both; bringing together the art and the science of winemaking. But here is the real question. How many of our readers make their wine in a scientific fashion? Noting every single detail about your sulfite levels, color of your wine, the taste, the smell and even the location it is stored in? Or are you the type of winemaker that adds sulfite without measuring or doesn’t take notes and just does “what the wine tells them to do”? END_OF_DOCUMENT_TOKEN_TO_BE_REPLACED 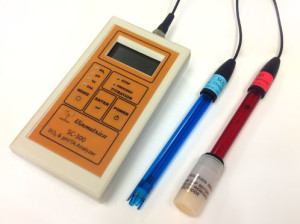 How does the Vinmetrica SC-300 SO2 and pH/TA Analyzer Kit compare to other Free SO2 testers on the market? Daniel Pambianchi has done some benchmark comparisons between several Free SO2 testers available. He has created a full report outlining the methods, results and his conclusions. Thank you Daniel for your report. We are happy to share this with our customers. END_OF_DOCUMENT_TOKEN_TO_BE_REPLACED

By now you may have heard that we just released our newest product, the SC-50 MLF Analyzer. We have been working on this for nearly two years, mainly to be sure that the product is easy to use, reliable and accurate. The approach we took was to have the device measure the increase in CO2 pressure that occurs when malic acid is converted to lactic acid, a process we call ‘Biopressure’. This increase in pressure is then converted to an electrical current that the SC-100 or -300 SO2 analyzers can pick up and display. Pretty simple really, but the devil is in the details as they say. And quite honestly we expect the methods (but not the hardware) to improve over time as we learn new ways to make it even faster to use.

They idea of using pressure to measure malic acid in wine is not new in itself. Over 50 years ago, George Kolar of the Australian Wine Research Institute published an article entitled “Manometric Determination of l(—) Malic Acid in Grape Musts and Wines”* that described a method adapted from earlier biochemical research. This method was adopted widely during the 60s, but was eventually displaced by other analytical techniques, most notably the paper and liquid chromatographic methods, and enzymatic spectrometric assays. All of these later methods were either simpler (paper chromatography) or more accurate and suitable for commercial laboratory use. In contrast, the manometric (i.e., based on measuring gas pressure) method, while sensitive and accurate, involved complex glassware and a good deal of professional training to execute.

We believe that the SC-50 incorporates 21st century technology that makes it a pretty good manometric device that is easy to use; the Biopressure agents, reagents, and methods we have developed over the the last 2 years give Dr. Kolar’s technique an entirely new lease on life. You should be able to complete a few or a few dozen tests in 30 minutes, something that would have taken him (or probably his graduate student, poor soul) hours and hours, 50 years ago.

Vinmetrica specializes in wine testing equipment, but did you know that our instruments can also be used for beer making as well as distilling spirits? During the distillation of whiskey, the water used is the most crucial liquid used for production. It is vital to have water at the proper pH in order to smoothly run through the distillation process of mashing, fermentation, distillation and maturation. All good whiskeys start with the use of good quality water. The water needs to be at the proper pH, lower than pH 7, which is crucial for starch conversion. A distiller must also monitor the pH of the mash. The American Distilling Institute discusses the importance of obtaining and using a good pH meter in their paper, The Craft of Distilling Whiskey (http://www.distilling.com/PDF/craftbook.pdf).

A few months ago a customer purchased one of our SC-200 Kits in the hopes of using it for his up and coming distillery located in Berthoud, Colorado. Being in the heart of one of the largest craft/micro-brewing regions in the United States, the opening of K J Wood Distillers was a nice change and the owner, John Wood, was very welcoming. We always like checking in with our customers but the opportunity to visit one was a special treat. Their grand opening celebration took place on June 27th at their distillery. They offered several types of Gin cocktails ranging from a cucumber soda fizz to a cocktail with habanero peppers. I have never actually tried Gin but have heard that it can be a bit hard to drink. Their “Jinn Gin” was phenomenal. Yes, phenomenal!

During the celebration I was introduced to John’s neighbor who owns a winery, Sweetheart City Wines. After some casual discussion about wineries and wine-making in general, I was taken into his winery itself and given the grand tour. Come to find out he is one of our original customers and owns the original model of the SC-100. These two neighbors both own Vinmetrica SC series systems! One for a winery and one for a distillery. What are the chances of that?

Taylor had a wonderful time visiting K J Wood Distillers and seeing Colorado. I can’t wait to try the whiskey and I hope that their Vinmetrica SC-200 helps them make the best whiskey out there. Thank you to all our customers; from the wineries to the distilleries. 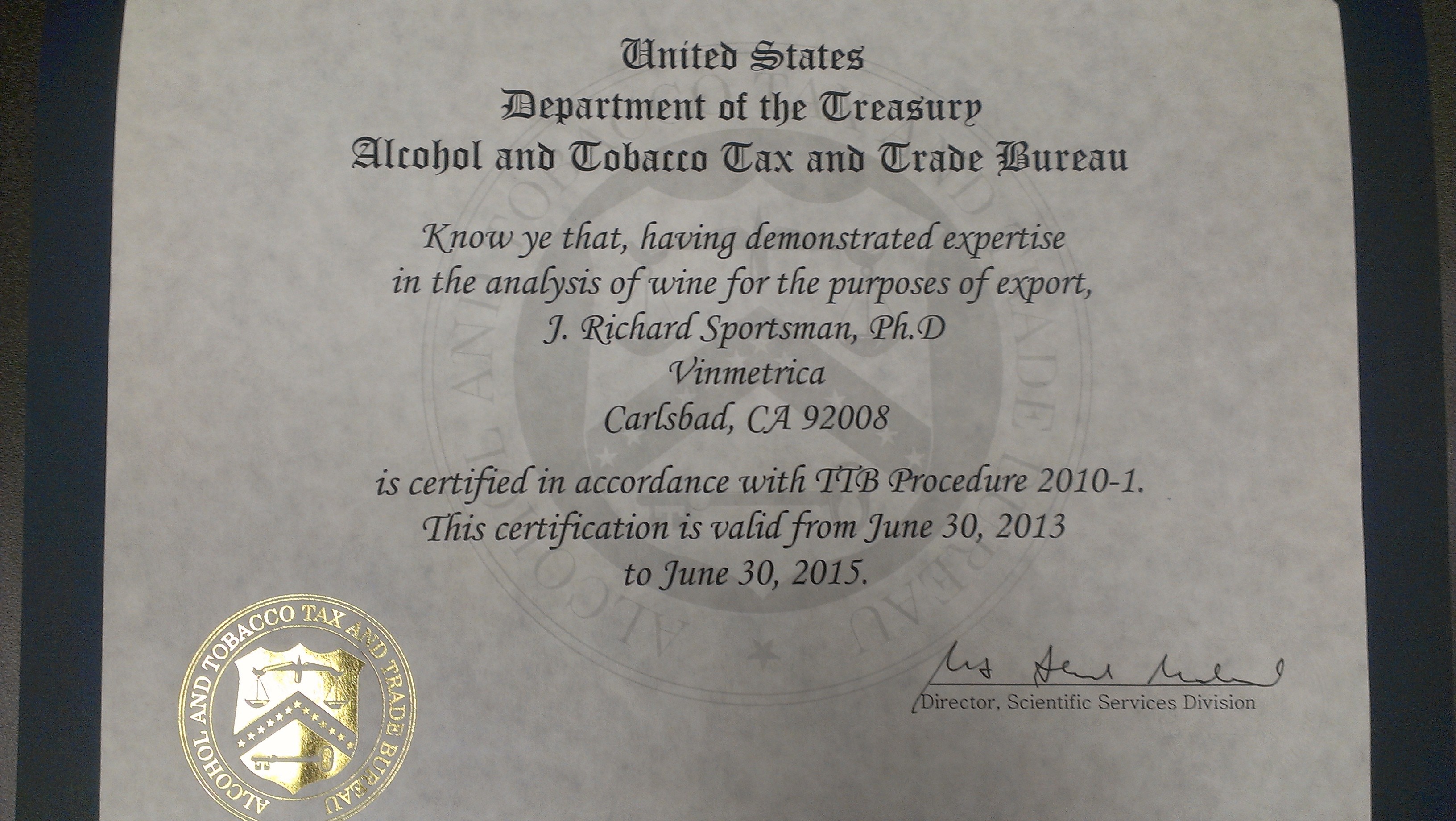 Did you know that if you plan on exporting your wine, you are required to present a specific chemical analysis? Vinmetrica is here to help! After a long testing and analysis process, Vinmetrica now has TTB certified laboratory technicians!

The process to obtain this certification was not an easy feat. The Alcohol and Tobacco Tax and Trade Bureau provided us with two standard wine samples, one red and one white. Being TTB certified gives our customers the piece of mind that their wines and spirits are being analyzed properly and according the the industry standard. Some of the analyses we performed for the certification were alcohol by volume, acetic acid, residual sugars, free sulfite, and methanol.

Vinmetrica provides services that give wine makers the confidence that their wine production is running smoothly.  Our TTB certification gives you the assurance that our analytical methods are held to the highest standards.

See you in two years TTB!