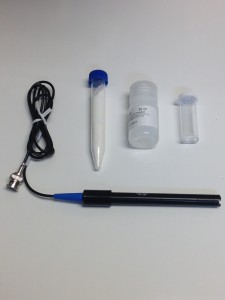 Introducing one of Vinmetrica’s newest products:  the Dissolved Oxygen  (DO) Probe, a tool for fast and accurate measurement of dissolved oxygen in your wine. Why measure DO in your wine? Oxygen plays a major role in winemaking, having both good and negative effects on the final product. Dissolved oxygen is helpful in small amounts, but too much could lead to an undesirable bottle of wine. By just taking a few measurements you can quickly take control of that.

The Vinmetrica DO probe works via the pH function on an SC-200 or 300.  For those of you with firmware version x.1.1 and above, a millivolt (mV) mode option to pH is available.  Either function works, but for our purposes I worked with mV mode. To use mV mode all you do is turn on the instrument, put it in normal pH mode, then hit the Mode button one more time. The pH LED should now be blinking; this is mV mode. Set-up for the DO probe is relatively simple; before using it for the first time you must add electrolyte solution that goes in between the membrane and zinc anode. Unscrew the cap and, using a syringe or pipette, fill it as directed with the provided electrolyte solution.  Screw the cap back onto probe, attach the probe to the instrument via the BNC connection, select the desired mode, and you are ready to go!

In simple terms, the probe works by allowing oxygen to pass through its membrane where it creates an electrical current between a cathode, electrolyte solution and anode, much as a battery does.  This produces a change in electrode voltage that the instrument measures. The calculation for the DO probe is also very simple. By using known values for a 100% O2 saturation (open air) and a 0% O2 saturation ( a sodium sulfite solution) you can calculate your wine’s percent DO. The calculation looks like this:

The testing process also is really simple. With the probe attached and the instrument on, take your 100% reading; record the data.  Again, this is just letting the probe sit out in open air.  Now make your 0% standard, by adding about 750 mg to 1 gram of the provided sodium sulfite to 2 mL distilled H2O. (This is a saturated solution in which solid particles are still visible and do not dissolve.) Stick the probe in this solution and gently keep the solution mixing. The number will start to drop in mV mode (or go up if using pH mode). As I have seen, it drops rather rapidly at first but takes 3-4 minutes to finally reach its end point which is typically between 8-13 mV (6.5-7.0 in pH mode). Record the lowest value for mV mode.

I have been using our DO probe in the winery, so I thought it would be interesting to share some typical results. First I took some measurements on a 2012 bottle of wine that was made and bottled by Dr. Rich Sportsman in 2012.  I tested different methods. First I stuck the probe directly into the bottle. I have found that the probe reaches its final value faster if you gently mix/stir the probe in the solution.  I next tested the wine by taking out a 2mL sample, placing it in a small tube, and then measuring the DO.  I then took the 2 mL sample and bubbled air through it for 30 seconds and measured the results.

As you can see the DO probe shows a large difference between the 100% saturation and 0% saturation. The data also follows what you might expect. The bottle has relatively low DO, but as soon as you take out a small sample into another container, the wine immediately starts picking up oxygen. This data allowed us to come to the conclusion that for the most accurate DO measurement, it is best to place the probe directly into the wine container.

Now I wanted to see what wine DO levels looked like in younger wines. I went through and measured some of our 2015 containers.  For cleanliness, I sprayed the electrode with a 50% ethanol solution and gently wiped the probe with a cleaning tissue before putting the probe into the wine. Also, all the wine had been sparged with nitrogen the day prior. Here are the results.

We are pretty happy with these numbers at this point. I will keep checking to make sure these stay stable and do not pick up excess O2. At the very least it will now be very interesting measuring dissolved oxygen, seeing how and if it changes, and later seeing its effects on the wine.

Of course, one very important use we foresee for our DO probe is verifying that levels of DO are below about 10% saturation at bottling time.  This should prevent unwanted effects of excess oxidation on taste and sensation of the finished product.

You can check out the manual for the Dissolved Oxygen Probe here.